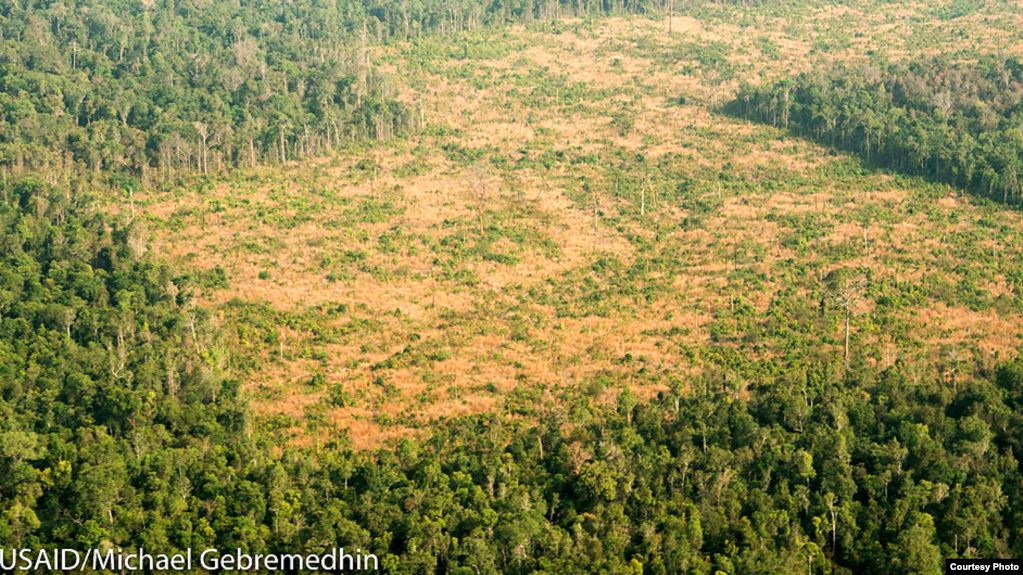 An aerial view of Prey Lang from a helicopter in 2016. (Courtesy photo of USAID/Michael Gebremedhin)

Researchers at the University of Copenhagen released an open letter Thursday reporting a 73 percent increase in deforestation in 2019 at the Prey Lang Wildlife Sanctuary, compared to 2018, while criticizing the government’s ban on certain patrolling operations.

The University of Copenhagen’s open letter used data from the University of Maryland’s Global Forest Change dataset and other data points to show that 7,510 hectares of forestland were lost at the Prey Lang Wildlife Sanctuary in 2019, the worst loss since 2016 when the area was designated a protected area.

“We hope that the attached documentation of forest loss will be well received and help the Ministry in Environment and their partners in the protection of the Prey Lang Wildlife Sanctuary for the sake of all Cambodians,” said Ida Theilade, a professor at the University of Copenhagen’s Department of Food and Resource Economics.

The letter criticizes the government’s actions to prevent the Prey Lang Community Network (PLCN), which patrols the fast-disappearing evergreen forest, from conducting its work. It also points to the “silent approval” by USAID and implementing partner Tetra Tech, which provides millions of dollars under the “Greening Prey Lang” project, for the intimidation tactics used against the PLCN.

“As scientists, we are concerned that the Ministry of Environment and their partners, USAID and the American company Tetra Tech, has either not detected the forest disturbance or has chosen not to communicate it to the public,” Ida Theilade added in her email to VOA Khmer.

The findings, which also used data from the Joint Research Centre (JRC) of the European Commission, showed that Prey Lang lost “more than one football pitch” of forest cover every hour in 2019, equaling 0.71 hectares of loss an hour. 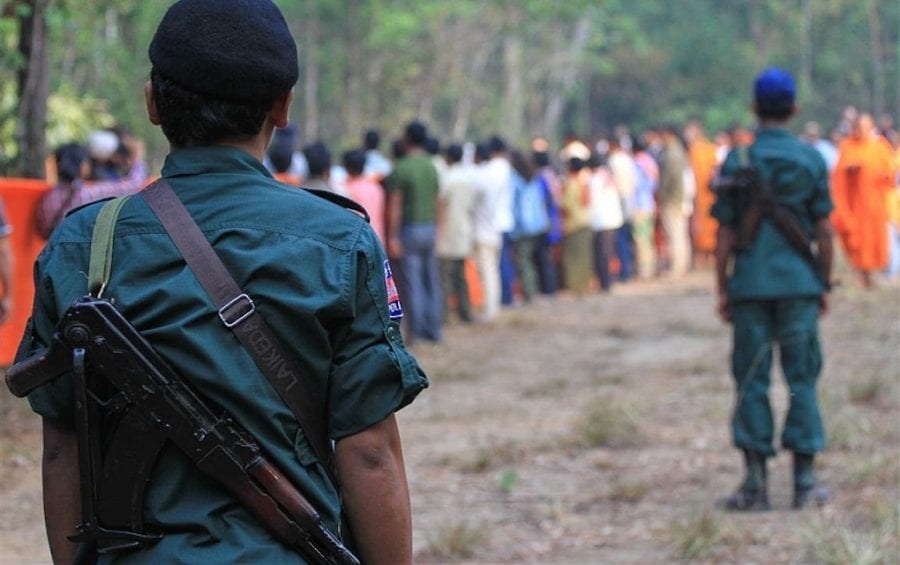 Additionally, the forest loss had led to the emission of 3.52 megatonnes of carbon dioxide, the equivalent of 760,473 cars driven for a year, the open letter reads.

According to the data from the University of Maryland, Cambodia lost 63,000 hectares of forest in 2019, the tenth highest in the world last year, and had seen 26 percent of its tree cover disappear since 2000.

The letter, using media reports, was critical of the Ministry of Environment for effectively criminalizing the activities of the PLCN and threatening to jail its activists for using satellite imagery to monitor forest loss in Prey Lang.

The government’s handling of the PLCN and deforestation activities at the wildlife sanctuary caused serious controversy this year and received widespread condemnation from NGOs and civil society groups.

In February, government forces blocked around 100 activists and civil society groups from performing the annual blessing ceremony of the trees at Prey Lang. The government at the time claimed PLCN was “anarchical” and not registered with the Ministry of Interior under the controversial LANGO legislation.

Weeks later, celebrated environmentalist Ouch Leng and three associates, two from PLCN, were detained and questioned by Kratie Provincial Court for “trespassing” on March 13, only to be released two days later. The group was attempting to document forest loss inside the Think Biotech land concession in the Prey Lang protected area.

FILE- Ouch Leng (third from the left), winner of Goldman Environmental Prize 2016, and three other environmental activists were released after being detained for “trespassing” in the Prey Lang protected area. (Courtesy photo of CCHR)

On Thursday, the Ministry of Environment spokesperson Neth Pheaktra refused to comment on the open letter or the forest loss findings, only to say that the government had “high commitment” to protecting Prey Lang.

“It is not necessary for the [Environment] Ministry to respond to any report of the third group, which is not a part of the cooperation work involved in managing and protecting Prey Lang,” he said.

“I acknowledge that there are still forest offenses on a small scale,” he added.

The Joint Research Centre, using its Forest Canopy Disturbance Monitoring tool, reported there was an additional 2,565 hectares of forest loss, likely from small-scale encroachments and single tree removals. But, this was in addition to the 7,510 hectares lost in the sanctuary, the findings showed.

The U.S. Embassy in Phnom Penh on Friday said it was unable to provide comment as of publication.

The embassy did release a statement on Friday highlighting an agreement with the government to provide approximately $18 million for agriculture and environment programs in Cambodia, as part of a $56 million assistance package, which also included education and health funding.

“The funds will also support environmental programs that reduce the vulnerability of people and landscapes to the effects of a changing climate and help Cambodia meet its international commitments to reduce greenhouse gas emissions, especially from deforestation and forest degradation, in collaboration with the Ministry of Environment,” read the statement. 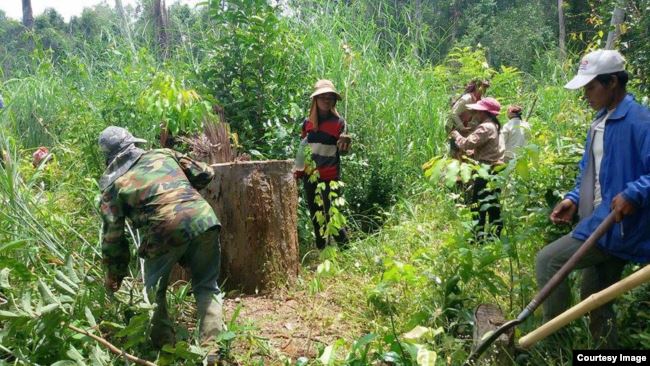 Sok Phloak, 34, a representative from Prey Lang Community Network in Kampong Thom province, said he is concerned that the forests will be lost if there were no measures to provide sufficient protection.

“I dare to say that Prey Lang will be ruined if the cutting of the forest continues like this,” he said.

Hoeun Sopheap, another member of PLCN, said the group was still unable to monitor deforestation and forest crimes because the Environment Ministry claimed it was not registered legally.

“They target us as the core group. When they meet us, they don’t allow us in. It is difficult for us to do any activities,” he said.

According to Open Development Cambodia, the Prey Lang forest spans four provinces – Kratie, Stung Treng, Kampong Thom, and Preah Vihear. It is one of the largest remaining evergreen forests in Cambodia, and Southeast Asia, having large ecological, cultural, and economic value.