The Prey Lang Community Network (PLCN) is a network of local community members working to save the Prey Lang forest from illegal logging and industrial agriculture. The network patrols the forest and records illegal logging and conversion of forest within the protected Prey Lang Wildlife Sanctuary and reports its findings to policy makers and the general public.

PLCN collects and communicates information on illegal logging activity in the Prey Lang forest. The information is collected by the network during patrols into the forest using smartphone technology. The network brings the information to national policy makers and the Cambodian public in reports and on social media. 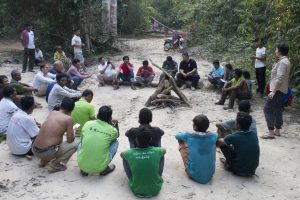 PLCN has 400 active members from communities in Prey Lang’s surrounding provinces – Kratie, Stung Treng, Kampong Thom, and Preah Vihear. All members give their time and efforts to preserve the forest on a voluntary basis.

The network is organized into an elected core group of 28 network members and a Steering Committee comprising a representative from each of the provinces.

On a patrol PLCN members usually follow the sounds of logging such as chainsaws and large trucks. In most cases, loggers manage to leave before our members reach them, abandoning logged timber and chainsaws.

In these circumstances, the chainsaws are confiscated, their serial numbers noted down and they are subsequently handed over to the Ministry of Environment. The timber is often impossible to transport and therefore left behind or burned. 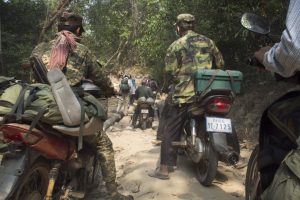 When PLCN members encounter loggers during patrols, the first step is to initiate a peaceful dialogue with them. We then check whether they have logging permits. If they do not, which is usually the case, we inform them about the destructive effects of logging on the forest and communities.

We then make the loggers sign a contract stating that they will not take part in illegal logging activities in the future. These contracts then form a database of the names and faces of illegal loggers.

PLCN has received three international prizes rewarding our work to protect the forest.

The Innovation Prize is given to honor outstanding multidisciplinary projects that address sustainable resource use in the tropics.

In September 2013, PLCN received the Alexander Soros Foundation Annual Award. The Award was given to PLCN in honor of environmental activist Chut Wutty (link), who was assassinated in 2012.

With more than 182 participating countries and over 2000 project submissions annually the Energy Globe Award is today’s most prestigious environmental prize worldwide. It distinguishes projects regionally, nationally and globally that conserve resources such as energy or utilize renewable or emission-free sources. Award ceremonies are held all over the world. Prominent personalities as well as Energy Globe Ambassadors in 90 countries support the mission of Energy Globe.