The Prey Lang app is used by PLCN to collect data on the illegal logging of Prey Lang, and the impact this has on biodiversity and local livelihoods. This data is then analyzed in reports and communicated to policy makers and the Cambodian public.

Collecting data with the app offers PLCN a structured way of gathering  information on the deforestation of the forest. This is highly useful in the networks advocacy efforts.

The network began collecting data with the app in February 2015, with funding from the Alexander Soros Foundation and DANIDA. The network has since then had 35 smartphones with the app operating in the forest.

Web Essentials developed the app in close collaboration with PLCN members and University of Copenhagen. The process of developing the app is ongoing and dynamic. Database managers and developers are continuously collaborating with PLCN to improve it.

Use of the app

When members use the smartphone app, their recordings fall into three categories 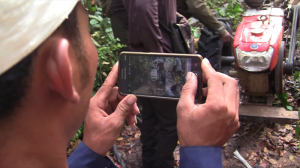 PLCN member recording in the forest

Besides recording illegal logging activities, an important part of the data collection consists of recording the natural resources and cultural sites found within Prey Lang forest. This helps underline the importance of protecting the forest.

Illegal logging activity refers to the extraction of wood or other natural resources in the Prey Lang area. PLCN uses the app to record every time they see stumps of wood, the transportation of timber, cleared areas or planks of wood left in the forest.

Natural resources refer to all natural resources found in Prey Lang such as trees, plants, and wildlife. Of the tree species, resin trees, such as Dipterocarpus species (Hopea, Shorea and Vatica) are most often recorded by PLCN. Resin can be sold on the local markets and gives families in Prey Lang a vital income. PLCN also records high-value timber species threatened by logging.

Reporting refers to two major subcategories: Positive interactions (mainly with the authorities) and negative interactions such as threats or violence towards patrol members, which can be documented with the newly introduced security component of the app.

The data collected by network members is uploaded into a database and then analyzed by researchers at Copenhagen University. Audiovisual proof, such as audio recordings, photos, and GPS coordinates accompanies all data.

Since the start of the data collection, PLCN’s efficiency in this regard has increased significantly. Continued training of our members and improved versions of the app are clearly paying off in terms of the amount and quality of data collected.

The work conducted by PLCN has resulted in the most extensive source of data on illegal logging activities in Prey Lang and, possibly, in Cambodia as a whole. This data is highly valuable for national decision and policy-makers, as well as researchers within the field and a general Cambodian public.