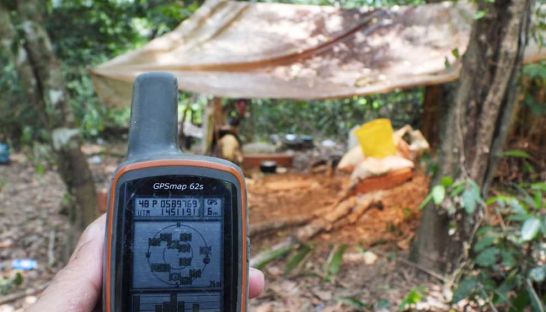 Forest activists in Prey Lang claim to have discovered campsites of loggers while conducting a probe. Photo supplied

Forest activists conducted a 10-day forest crimes investigation in the Prey Lang region and claimed to have found more than 200 workers camping in five different locations cutting down about 2,000 trees. Authorities have denied the claim.

Heng Sros, a forest activist in Stung Treng province, told The Post on Tuesday that his four-man team was investigating forest crimes in the Prey Lang region from April 17-27.

Between April 20 and 23, they saw five groups of loggers, each with 50 to 60 people camping to cut trees to be transported by tractor, allegedly for sale to Think Biotech (Cambodia) Co Ltd and the Angkor Plywood Co Ltd.

He said the five campsites were located in Sambor district, Kratie province, where more than 2,000 trees have already been felled – each about 0.5-3m in diameter. He said they used nearly 200 tractors to transport the timber.

“We have evidence, including pictures, and we know that a company supervisor was trying to retrieve a tree that was 3m in diameter. The workers are cutting all varieties of trees, including the indigenous resin, which the communities depend on.

“We met the workers who were cutting the trees and interviewed them. We asked them where they were selling the timber and how many workers there were. They said the areas where the camps are located are 3km in distance from one area to another,” he said.

Sros said the logging activities involved environmental officials who tried to block access to the Prey Lang region from April 20 to prevent activists and people living around the region to access the forest.

He said his team had searched the region by not letting authorities know in advance and while no roadblocks surrounded Prey Lang.

“I think the Ministry of Environment and relevant institutions should study this and not allow a company to destroy natural resources.

“One of the extremely cruel acts that Khmer people face is the fact that activists and monks who are trying very hard to prevent forest destruction are accused of being terrorists or traitors. All such words used against us should stop,” he said.

Sros accused law enforcement officials of protecting those destroying the forests and said they failed to use the law to protect nature lovers.

“What Sros said is not true and misleading, because I had already reached the targets and Sros took old pictures to publish,” Chhay Savuth said.

The ministry recently issued an announcement warning of legal action against certain organisations and associations, claiming they were acting illegally in protected areas as they had not registered with the Ministry of Interior and have no agreement with the environment ministry.

Ministry of Environment secretary of state Neth Pheaktra said he would not respond without a specific written report.

“How do I assess the claim and how do I trust the report? I will not comment on this verbal report. On the other hand, the ministry urges groups of individuals who act as environmental activists, NGOs or associations to learn to work with authorities and respect the law,” he said.