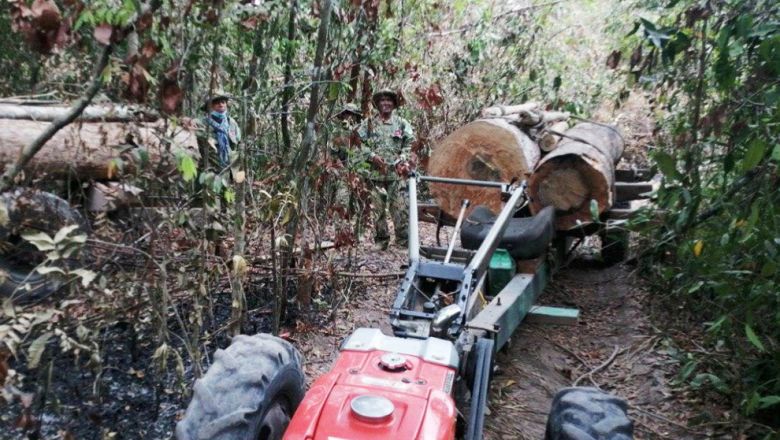 Illegal logging in Prey Lang is a major conern for the PLCN community group. Hean Rangsey

Ministry of Environment officials have warned it will take legal action against Prey Lang Community Network (PLCN) and several other organisations if they continue to collect deforestation data in the area.

The ministry’s warning comes after PLCN suggested a new programme that would use satellite imagery to monitor and collect information on forest clearance in Prey Lang after the ministry banned the group from patrolling it.

But the ministry’s secretary of state and spokesman Neth Pheaktra told The Post on Wednesday that the activities of the PLCN are now against the law. He said the community network is being exploited for political purposes.

“Using satellite systems to search for data in an unjustified and unauthorised way can be illegal and the ministry may consider asking the authorities to take legal action against on relevant people.

“[These] activities by the PLCN and several other organisations are taking place under the label of environmentalists and lovers of natural resources. But it is embedded in dishonesty. They are not environmental activists but political activists.

“The ministry warns the organisations that have been working on the conservation of natural resources that they need to have an agreement with the Ministry of Environment under the law, otherwise we have no choice but to take legal action,” he said.

On April 17, the Prey Lang Community Network informed the ministry that when it is not possible to conduct forest patrols and collect data on forest crimes, biodiversity and climate change as before, it will use satellite imagery technology with the help of technical experts instead.

It said the University of Maryland, which is supported by Global Forest Watch’s technology, is comparing images taken by satellite in the Prey Lang Wildlife Sanctuary and others forests.

“While PLCN is banned from entering Prey Lang, illegal loggers can freely enter the forest to fell trees. We will use satellite imagery to keep an eye on them,” PLCN said.

Hoeun Sopheap, a PLCN member in Kampong Thom province, said the only purpose of the community network is to increase the forest cover in the Prey Lang area.

“The government and the ministry should thank the PLCN because the job of forest protection is the government’s work.

“When there are other parties that want to join, I think the government should thank them. There should not be warnings and rebukes of the groups that are helping them,” he said.

The PLCN was banned from patrolling in Prey Lang after the group released a report on February 3, claiming that from 2001 to 2018, more than 40,000ha of forest, or almost 10 per cent of the Prey Lang Wildlife Sanctuary, have been lost.

The PLCN said in the coming weeks it will publish satellite images, including a notification of deforestation by Global Forest Watch.