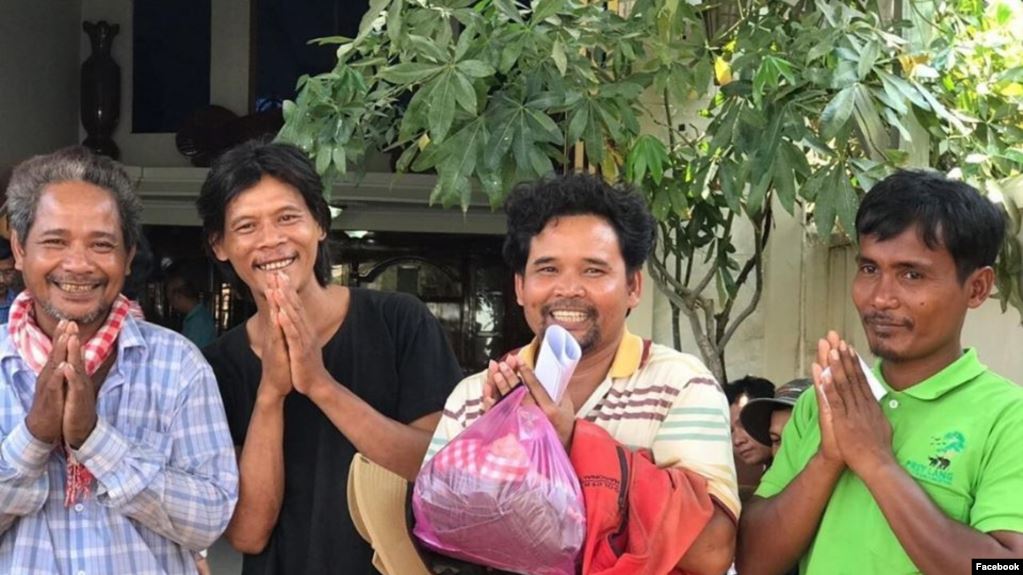 Ouch Leng (third from the left), Goldman Environmental Prize 2016 and three other environmental activists are released after being detained for four days. (Courtesy photo of CCHR)

Four activists, including noted environmentalist Ouch Leng, were released by the Kratie Provincial Court Monday afternoon, after being detained last week as they investigated illegal logging operations in the Prey Land protected forest.

The Kratie Provincial Court questioned the four environmental activists on Sunday after Sambor district police arrested them when they were investigating illegal logging inside the Think Biotech land concession in the Prey Lang protected area. They were released Monday afternoon without being charged, though are still under investigation.

The four activists are Ouch Leng, head of the Cambodian Human Rights Task Force and the 2016 Goldman Environmental Prize winner; Khem Soky and Srey Thei, from the Prey Lang Community Network (PLCN); and Men Mat, who was physically assaulted by company workers while inside the Think Biotech compound on March 13.

Following his release, Ouch Leng said they had signed an agreement with the court to halt their investigations till they submitted documents relating to the registration of their NGOs.

This was confirmed by a copy of the agreements seen by VOA Khmer, with the document saying the prosecutor can take action if they break the understanding.

Despite the bureaucratic hurdle ahead of him, Ouch Leng said he will continue his environmental activism, pointing to his detention as the reason why his NGO had to continue its work.

“That’s why I have to carry on the investigation work in 2020. And while we’re investigation, they conspire to crack down on us,” he said.

On Sunday, VOA Khmer reported that the four environmentalists were being questioned for two charges in the Criminal Code, relating to “breaking and entering into dwelling” and theft, as well as Ouch Leng being questioned about his NGO’s registration status.

One of the four, Men Mat, was beaten on the head said Ouch Leng and while the court accept the company’s lawsuit they have not taken any actions against the security guards who beat up his team member.

Soeung Senkarona, an investigator with rights group Adhoc, said the detentions were a serious act of intimidation to environmentalists, who were trying to highlight the serious issue of illegal logging. But instead of acting on this evidence, he said, the authorities were instead detaining the activists.

“[Authorities] have received a lot of answers and photographic evidence from environmentalist groups, who risk their life to find the evidence,” he said. “Thus, they should take actions against the criminals involved in illegal loggings instead.”

VOA Khmer could not reach Kratie Provincial Court officials and representatives for Think Biotech. Neth Pheaktra, a Ministry of Environment spokesman, declined to comment on the issue.

A recent Prey Lang Community Network report pointed to the potential illegal logging of luxury wood within the Think Biotech concession, with another firm, Angkor Plywood responsible for processing the timber.

Also, last month, local authorities prevented civil society groups and activists from conducting a tree blessing ceremony in the Prey Lang protected forest, after claiming that the Prey Lang Community Network, which has conducted the event for years, was not registered with the Interior Ministry.