The winner of the 2016 Goldman Environmental Prize along with three other forestry activists were sent to the Kratie provincial court yesterday after Korean-owned Think Biotech Cambodia Co Ltd accused them of trespassing on company premises. 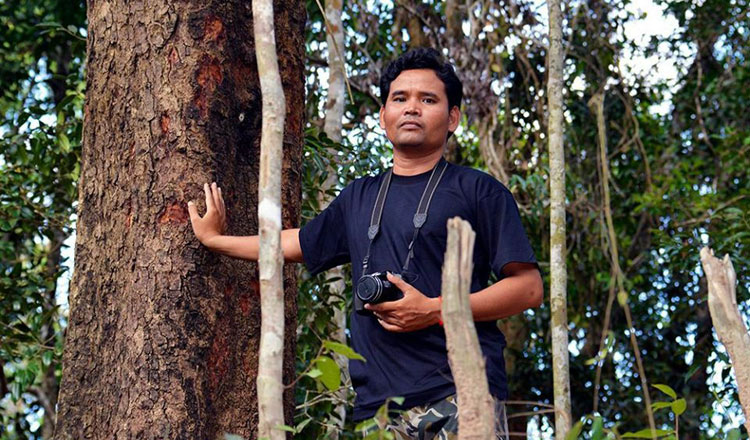 Ouch Leng and three other environmental activists were detained. CEN

Rights group Adhoc senior investigator Soeng Sen Karuna said yesterday  Ouch Leng, the president of the Cambodian Human Rights Task Force and winner of the 2016 Goldman Environmental Award in the US; and members of the Prey Lang Community Network Khem Soky, Srey Thei and Men Mat were detained on Friday.

The arrest, said Mr Sen Karuna, was unjust and discourages the younger generation who are involved in the protection of forests and the environment.

“If those four activists, who have been working hard to serve the society, are accused unjustly by the court, it will impair the enforcement of the law. The court should instead ask for their cooperation in addressing the crimes they found in Prey Lang forest,” he added.

Kratie Provincial Court prosecutor Keo Socheat said the prosecutors have been questioning the four without making any charges. “We will continue the inquiry tomorrow [Monday],” he said.

Yesterday, a group of youths and environmental activists stood in front of the Kratie Provincial Court to demand the immediate release of the arrested activists.

Twenty-four human rights and environmental organisations on Saturday also issued a joint statement to strongly condemn the company for the detention of the activists before being sent to the district police station.

According to the statement, the four activists on Thursday conducted an investigation into reported illegal logging activities in Prey Lang forest. That same evening, they decided to spend the night at a villager’s house located beside the Think Biotech premises. The next morning, a group of company-linked security guards approached and detained the four before handing them to the Sambour  district police.

“We see this ongoing detention as a threat to environmental and forestry activists who are peacefully monitoring and reporting on deforestation activities in Prey Lang and other forested areas. The activists were exercising their rights enshrined in the Constitution of Cambodia and the Law on Environmental Protection and Natural Resources Management, both of which encourage the public to actively participate in the protection of the country’s environment and natural resources,” the statement added.

The organisations considered the detention of the four environmental activists as an abuse of power as the act goes contrary to Cambodia’s code of criminal procedure. In response, they asked for the release of the four activists and called for an investigation regarding the irregularities behind their detention.