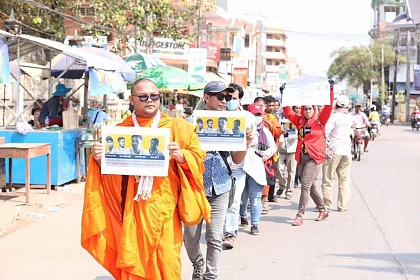 Four environmental activists, including Goldman Environmental Prize-winner Ouch Leng, have been released by the Kratie provincial prosecutor after the four men were beaten on Friday by guards of Think Biotech Co, Ltd, a joint Taiwanese-Khmer company repeatedly accused of illegal logging, before being handed over to local authorities for more than two days of questioning. Throughout their detention, dozens of local community members, activists and monks peacefully gathered in front of the provincial court to call for their freedom.

Leng was arrested alongside Prey Lang Community Network (PLCN) activist Khem Sokhy and Srey Thei as well as forestry activist Man Mat while investigating ongoing reports of illegal logging inside the protected Prey Lang forest. Think Biotech, which has been granted a 34,000-hectare concession, has been repeatedly accused by local communities of illegally harvesting timber within the protected forest as well as resin trees owned by local villagers.

Although none of the activists have been charged, all four remain under investigation as suspects, leaving them vulnerable to being summonsed by the police at any time.