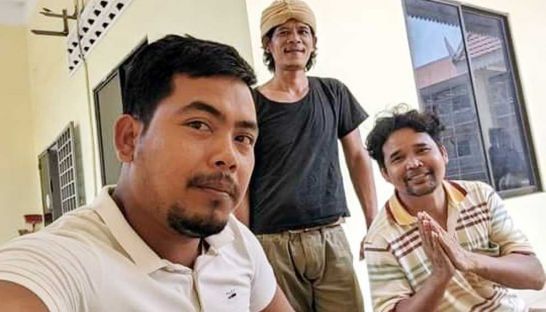 Ouch Leng and three others were arrested at Kratie Province. Photo supplied

Activist Ouch Leng and three members of the Prey Lang forest community were arrested on Friday after Think Biotech (Cambodia) Co Ltd accused them of entering its premises without permission.

Leng – who won the Goldman Prize for his activism and is the president of the Cambodian Human Rights Task Force – Khem Sokhy, Srey Thei and Mein Math are being questioned by the Kratie provincial court after Think Biotech filed a complaint against them.

Protesting in front of the court to demand the release of the activists on Sunday, Heng Sros, also a forest activist, said Leng and his companions were sued by Lach Phanno, a Think Biotech representative.

Sros said the deputy prosecutor has charged them with three offences under Articles 299 and 360 of the Criminal Code and Article 32 of the Law on Associations and NGOs (Lango). This is the first time that Lango has been used to charge Leng, according to Sros.

Sros said company security guards held the four and took them to its headquarters on Friday morning. The headquarters is located in Kratie province’s Sambor district.

The company questioned them and held them against their will. At 4am, the suspects were handed over to the district police.

“They are still in the hands of the court. I don’t know what the court will decide. I ask the court to release them because they didn’t do what the company claims they did,” Sros said.

Kratie provincial deputy police chief Kong Sidorn told The Post on Sunday that the four suspects were sent to court on Sunday morning for questioning.

“I received a complaint from the company. According to it, the suspects entered the company’s headquarters to take photos,” he said.

Ministry of Environment spokesman Neth Pheaktra said on Sunday that he had received the information, but had no comments on the case.

Neither Think Biotech director Lu Chu Chang nor company representative Chea Pov could be reached for comment on Sunday.

In 2011, Think Biotech was permitted to farm trees on 34,007ha of state land in Kratie and Stung Treng provinces.