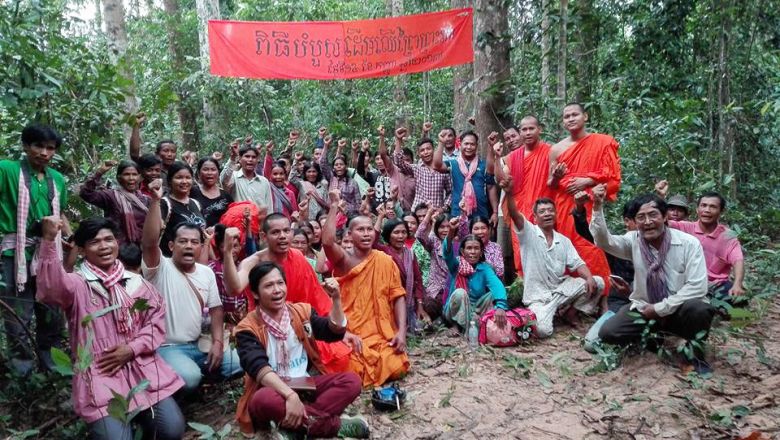 A tree ordination ceremony was held from Friday to Sunday to honour those who sacrificed their lives to protect the Prey Preah Roka Forest. Photo supplied

One hundred and thirty-two people, including members of the Prey Preah Roka Forest Community Network (PPRFCN) and monks from three districts of Tbeng Meanchey, Chheb and Choam Ksan in Preah Vihear province organised a tree ordination ceremony from Friday to Sunday to honour those who sacrificed their lives to protect the forest.

The ceremony also aimed to instil the spirit of cooperation in preserving remaining forests.

PPRFCN Tbeng Meanchey district representative Het Nay told The Post on Monday that the ceremony was organised by the districts’ residents, community members and monks.

The community network, he said, sent invitation letters to the Prey Lang Community Network, officials from relevant provincial institutions and the provincial administration, and some civil society organisations to join the ceremony.

However, only six officials from the provincial Forestry Administration, some civil society organisations and community members attended.

“Thousands of trees were ordained. The ordained trees were the ones that remained after forest offenders logged down the other trees.

“We fear that they would come back to log more trees and clear the land for farming,” said Nay.

“We went to join the community’s delightful programme. Hopefully, it stirred the will of forest preservation among the people and youth.

“There are no longer cases of deforestation in the Prey Preah Roka area. It has become peaceful because each of us participated in preserving the forest,” said Soeung.

“It’s good that the residents and the community network agreed to organise the tree ordination ceremony together. But relevant officials must implement the law more strictly and intensify their operations against land-clearing and poaching.

“This ordination is just a religious ceremony. They believe that loggers who cut down ordained trees will be cursed,” said Chan.

Provincial Department of Environment director Song Chan Socheat declined to comment on Monday as he was yet to receive a report from officials who joined the ceremony.

The forest is home to more than 28 species of threatened animals, including the endangered giant conches and seven species of endangered mammals such as pileated gibbon, fallow deer and banteng.