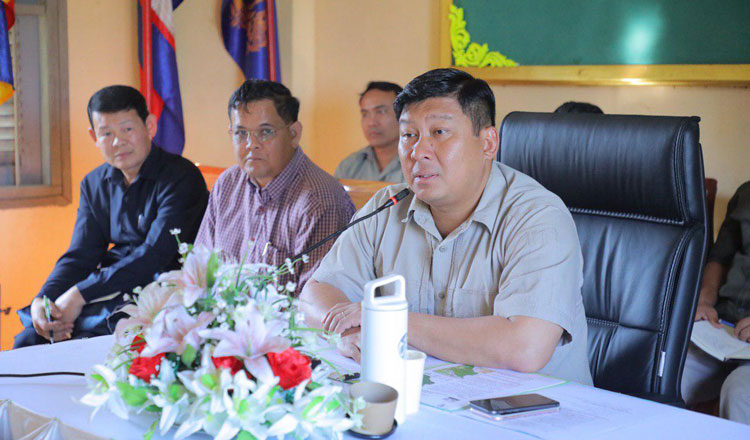 Environment Minister Say Samal has urged authorities in three provinces to prevent illegal land encroachment in the Samlot multi-purpose-use area and Phnom Samkos Wildlife Sanctuary as both areas are suffering from illegal occupations.

Mr Samal issued the order over the weekend in meetings with officials from Pursat, Battambang and Pailin provinces.

In a Facebook post on Sunday, the Environment Ministry said the meetings focused on the illegal occupations in the protected areas and also on some challenges that have occurred relating to the management and conservation of natural resources.

“Relevant authorities have to prevent crime in those protected areas, as well as participate in the development of natural protection communities through the building of infrastructure, including clean water projects,” the ministry quoted Mr Samal as saying during one of the meetings. “They must also provide knowledge on raising animals so that the community can improve their living conditions.”

“The ministry in the past has informed those who illegally occupy land that the ministry would not recognise those occupations,” he said. “We will take steps to seize those lands back as state property. For the perpetrators, we will prepare cases to send them to the court for further legal action.”

Mr Pheaktra added that Mr Samal will also visit the Prey Lang Wildlife Sanctuary today to check on the status of management and conservation of the area.

Pailin Deputy Governor Thou Phea yesterday said that some people in the community previously cleared land in the Samlot multi-purpose-use area for cultivation, after which authorities intervened and removed them from the area.

Mr Phea, who met with Mr Samal, noted that his officials will now strengthen protection measures, clearly locate protected areas and disseminate laws to people living nearby to avoid future land encroachment as instructed by the minister.

Chea Hean, director of the Natural Resource and Wildlife Preservation Organisation, said that despite the ministry’s efforts to disseminate laws and take action against perpetrators, people continue to grab land, sometimes with the permission of local authorities.

“The ministry should form an inspection team and investigate those areas directly and should take strict legal action in accordance with the Protected Areas Law and the Anti-Corruption Law against perpetrators and officials involved in the crime,” he said.