Prey Lang Wildlife Sanctuary in Cambodia continues to be illegally cleared, according to a new report by the Cambodian Youth Network (CYN).

Located in the central plains of Cambodia, Prey Lang forest straddles the four provinces of Kratie, Stung Treng, Kampong Thom and Preah Vihear. In 2016, to halt the rampant illegal logging that had been degrading the forest at an alarming rate, an area of nearly 4,320 square kilometers (1,668 square miles) of the forest was declared a wildlife sanctuary. But despite the protected area status, illegal clearing has continued unabated, local conservation groups have found.

Earlier this year, for example, a report by the Prey Lang Community Network (PLCN), a group of volunteers from communities living in and around Prey Lang, found that the protected area lost 56 square kilometers (22 square miles) of forest in 2017 alone.

Between July and August this year, CYN and PLCN investigated instances of illegal forest clearing in the northern part of the sanctuary. They patrolled 17.61 hectares (17.6 square kilometers, or 6.8 square miles) of the forest in Stung Treng and Preah Vihear provinces, and found that several hundred hectares of dense, evergreen forest had been cleared. 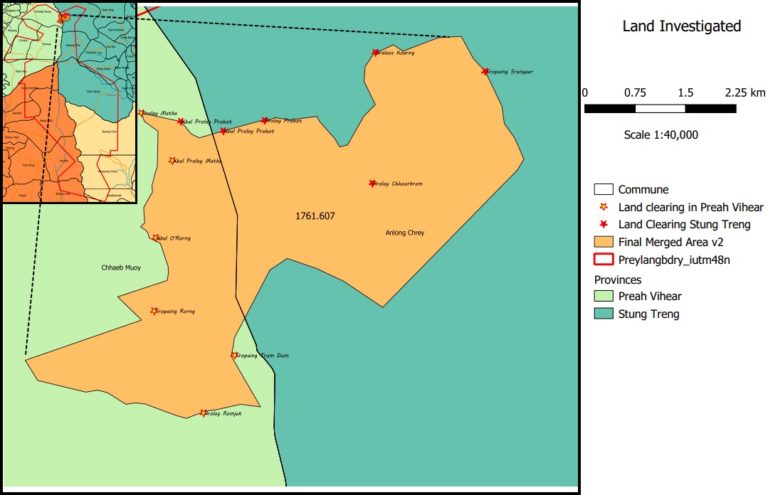 The patrol teams also found evidence of illegal logging that was to come. Smaller trees and undergrowth had been cleared in some places, which Mory said would make it easier for the loggers to cut bigger trees using chainsaws in the future. Hundreds of single trees had also been marked with red paint, suggesting they had been targeted for felling. Moreover, several trees had been logged in lines, some extending 200 to 500 meters (660 to 1,640 feet). The way in which the trees have been marked and lines cleared indicates that the loggers plan on subdividing the land into lots, Mory added.

CYN suspects that this is being done to make way for agro-industrial farming, to grow crops like cassava and cashew. While the investigation team couldn’t identify the people behind the land encroachment, it was able to identify some middlemen who had hired people from surrounding villages to cut down the trees.

“It’s mostly people from Kampong Cham and Thbong Khmom [also spelled Tbong Khmum] provinces who clear the forest inside the sanctuary — they have money and they hire people who are poor to clear the forest land for them,” Mory said. 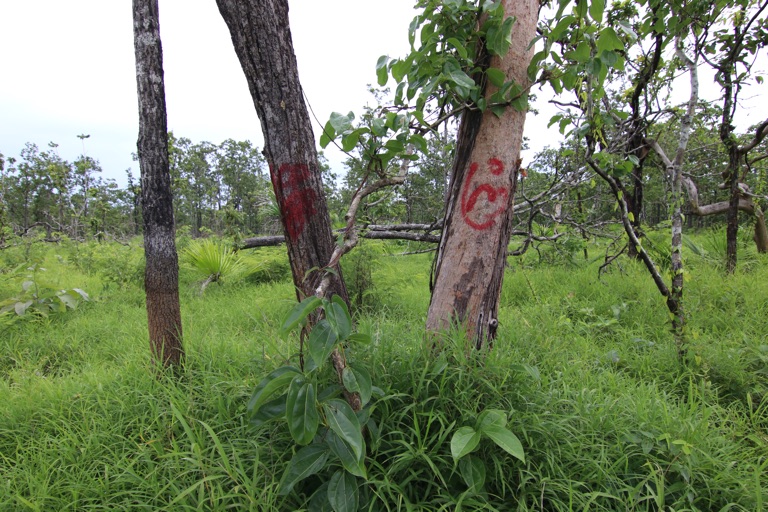 Forest clearing and land encroachment within Prey Lang is illegal. Still, Mory worries that if the clearing continues, the government could grant economic land concessions on those lands in the future.

“If there’s no effective crackdown on illegal encroachment then we will [see] huge areas of cleared forest,” Mory said.

The protected area isn’t being “protected” effectively, he added: “Frankly, since Prey Lang became a sanctuary we haven’t seen much change especially in terms of effectiveness of protection and conservation of the forest. Illegal logging still continues. Land encroachment still exists.”

CYN, which has shared its report and findings with the environment ministry, hopes to see immediate action.

“We want to see the ministry of environment take urgent investigation and effective intervention to crackdown and stop the logging and not allow any more clearing for farming purpose,” Mory said. “We can restore the forestland that has been cleared or burnt. If that land is occupied or granted economic concession, we’ll have no way to restore the forest cover.” 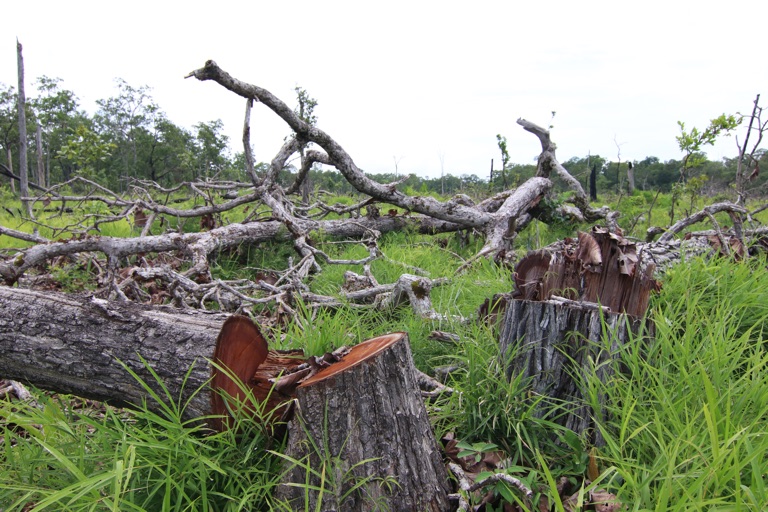