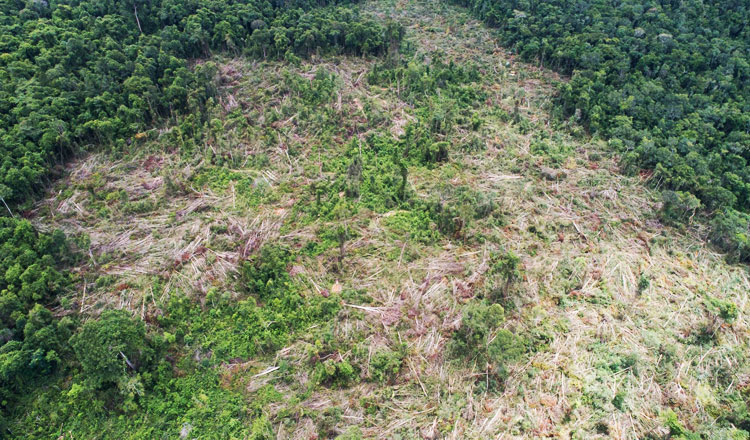 CYN said it conducted an investigation from July 13 to August 12 following complaints from villagers in the two provinces. CYN

The Cambodian Youth Network yesterday said hundreds of hectares of forest land in the Prey Lang Wildlife Sanctuary have been illegally cleared in Stung Treng and Preah Vihear provinces.

In a report released yesterday, CYN said it conducted an investigation from July 13 to August 12 following complaints from villagers in the two provinces.

It noted that the investigation was carried out in Stung Treng province’s Thalaborivat district and Preah Vihear province’s Chheb district.

CYN said a report was compiled after interviews with villagers and commune authorities, field checks and videos of land which had been cleared in the 1,761 hectare sanctuary.

It noted that trees were also found sprayed with paint by encroachers to mark boundaries.

CYN said there is evidence that the encroachment occurred after Prey Lang was created as a wildlife sanctuary in 2016 and voiced fears that as much as 3,000 hectares of forests could have been cleared both inside and outside the sanctuary.

“The forest land was mainly cleared to plant crops such as cassava and cashew by outsiders and unidentified residents,” it noted.

The report said some villagers who have no land or very few plots are also believed to have cleared the forest to grow cashew and cassava.

It found that law enforcement by the relevant authorities, especially forest rangers and commune administrators, is still weak, leaving Prey Lang exposed to deforestation and illegal hunting which affect its ecosystem.

Sar Mory, a CNY deputy president, yesterday said the evidence contained in the report could be used to prompt relevant officials to urgently take action against encroaching.

“If the relevant officials do not take urgent action, a lot more forest land will be cleared and the situation will become very serious,” he said.

Mr Mory noted that CYN has already sent its report to the Ministry of Environment, including the video proof of land and forest clearing activities, but has yet to receive a response.

“I want to re-confirm that the Royal Government via the Ministry of Environment is highly committed to curbing exploitation and encroachment of forest areas in protected areas,” he said.

Mr Pheaktra noted that the ministry has taken back land from illegal encroachments and some of the perpetrators have been sent to court over the illegal land clearing.

“We are worried about the situation,” he said. “If clearing activities continue, Prey Lang forest will not be sustainable.”