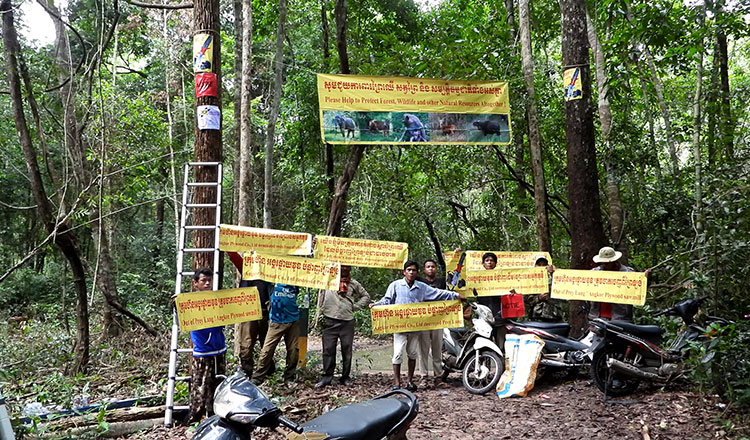 Members of the Prey Lang Community Network gather for an environmental event. CHRTF

Members of the Prey Lang Community Network are urging the National Committee for Forest Crime Prevention to close a sawmill run by Think Biotech in Kratie province.

According to a PLCN statement published yesterday, members from the provinces of Kratie, Stung Treng, Preah Vihear and Kampong Thom said the government has replanted trees in the Prey Lang area and stayed in line with its commitment to conserve Cambodia’s natural resources.

“The Prey Lang Community Network lauds and supports the actions of the National Committee for Forest Crime Prevention, Environment Ministry and relevant authorities that suppress forestry crimes and restore forests,” it said.

However, it said the NCFCP must shutter a sawmill belonging to Think Biotech in Kratie province due to fear of illegal logging.

Ek Sovanna, a PLCN representative from Kratie, said the community members are concerned because the sawmill is located close to the Prey Lang protected area.

“We are concerned that the company may do their timber business beyond its [permitted] location, into Prey Lang,” Mr Sovanna said. “There were also some reports that stated that this company is not yet legal. So we asked the national committee to [investigate] the company.”

“If the company is found to be illegal, please take action to close it immediately,” he added.

He noted that ever since the NCFCP began cracking down on forestry crimes, illegal activities within the protected area had ceased.

“The logging, forest burning, timber transporting from Prey Lang area in the past occurred continuously, but it is quiet recently,” Mr Sovanna said. “So, I would like to ask the committee to continue this work to be more active. Because if [the work] is suspended, I am afraid that forestry crimes will happen again.”

Brigadier General Eng Hy, spokesman for the NCFCP, yesterday said the committee will continue to take measures to prevent and suppress forestry crimes in order to protect natural resources.

Brig Gen Hy noted that the PLCN should first file a complaint with provincial authorities.

“I would like to thank the Prey Lang Community Network that supports the measures of the national committee on forestry issues, and thanks for providing this information,” he said. “However, for the case of any sawmill, please file a complaint with provincial authorities who have the authority to do this work. If the provincial [authorities] do not solve it, they can later proceed to the national level.”

Representatives of Think Biotech could not be reached for comment yesterday.

Environment Ministry spokesman Neth Pheaktra yesterday said: “Thank you to the Prey Lang Community Network for recognising the facts and efforts of the government in the conservation and implementation of the law against [forestry crimes]. The participation of citizens and communities is necessary to protect natural resources.”