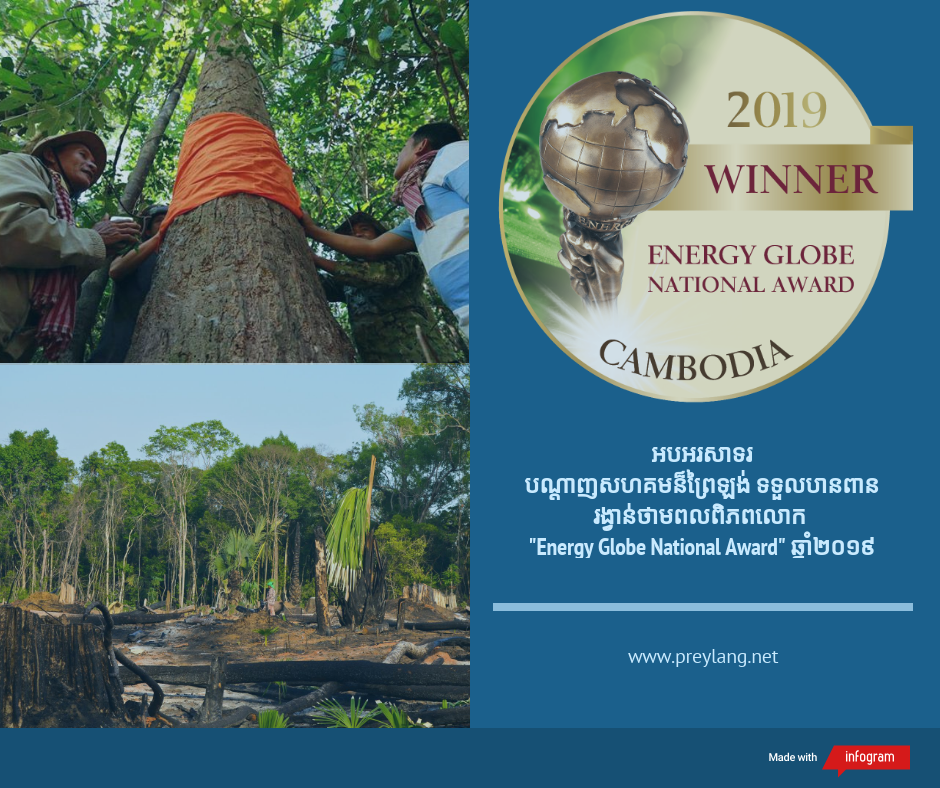 Ek Sovanna, a PLCN representative in Kratie province, told The Post on Monday that PLCN had won a National Energy Globe Award this month for its environmental protection efforts in Cambodia.

The Energy Globe Awards are one of the most prestigious environmental prizes worldwide, with winners selected by a jury made up of members from the UN Industrial Development Organisation, the World Bank and the European Renewable Energy Council.

“We are delighted to win this National Energy Globe Award,” Sovanna said.

Each year, energy and natural preservation projects from over 182 participating countries are submitted for review for National and World Awards.

The 2019 National Energy Globe Award is the fourth prestigious prize PLCN has received for its efforts.

In 2017 PLCN was awarded the International Society for Tropical Foresters (ISTF) Innovation Prize, while in 2015, it received the UNDP Equator Initiative Prize.

The network patrols the forest and records illegal logging and the removal of valuable resources, reporting its findings to policymakers and the public.

The group is known for taking a bold stance against authorities, often criticising them for their inaction on protecting the environment.

Most recently, in March this year, the group issued a report saying that 152 forestry crimes were committed in January in Prey Lang forest’s four provinces – Kampong Thom, Kratie, Preah Vihear and Stung Treng – the third highest number recorded since 2015.

PCLN’s Preah Vihear province coordinating committee member Srey Thei told The Post at the time that crime in the forest had doubled because local authorities did not seem to take action.

Sometimes, he said, PLCN invited the authorities to join their patrols, but it was told they were too busy.

He said the patrol teams had fewer members than the people who actively commit crimes in the area.

“We need to ask for more task forces from the authorities. Our community can’t stop them, because the teams that commit offences are very powerful, and the authorities said they were busy,” he said.

Stung Treng provincial environment department deputy director Lay Laro told The Post at the time that the report was false.

He said forestry crimes had reduced as a result of cooperation between environment department officers and other NGOs who protect and patrol the area.