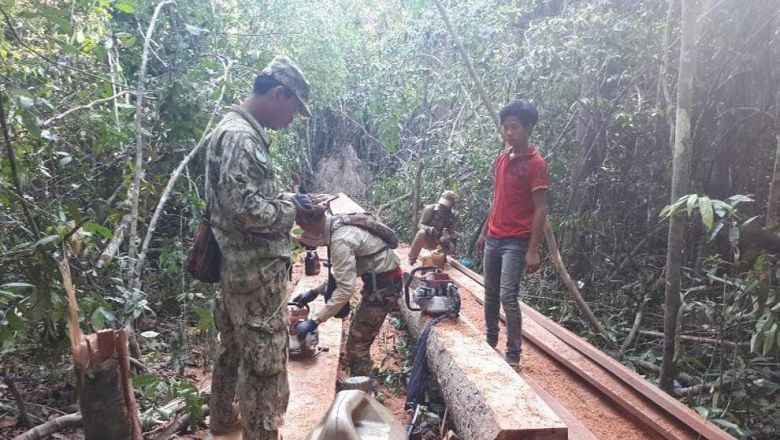 A prominent forest monitoring group on Monday urged the government to combat illegal logging and poaching in the Prey Lang Wildlife Sanctuary, which it claimed had seen a drastic increase in forestry crimes during the first five months of this year.

The Prey Lang Community Network (PLCN) – a grassroots movement working to preserve Prey Lang forest, spanning Kratie, Stung Treng, Preah Vihear and Kampong Thom provinces – claimed in a statement on Monday that the rapid increase was due to local authorities turning a blind eye, an accusation a spokesman for the Ministry of Environment dismissed as politically motivated.

PLCN alleged that local authorities had openly allowed loggers to transport timber and logging equipment via numerous makeshift trucks on a daily basis, while powerful individuals and newcomers had cleared the forest and wild animals’ habitats for private ownership.

The group claimed illegal gold mining activities by “anarchists” and private firms, the opening of a sawmill allegedly belonging to Think Biotech (Cambodia) Co Ltd, poaching with unauthorised home-made guns, and permits from authorities allowing villagers to fell trees for housing materials have also significantly contributed to deforestation in the sanctuary.

Chheang Ly, a PLCN representative in Preah Vihear province, told The Post on Monday that the group had conducted monthly patrols in the forest since late last year and found that logging had continued unabated throughout the four provinces.

“Logging activities have increased dramatically this year, especially since February,” she said.

PLCN called on the government to take tough actions against forestry crimes and for the Ministry of Environment to lay out specific measures in combating the crimes.

It said the government needs to confiscate all chainsaws from each village, commune, district and provincial town, ban the import of chainsaws and punish officials who failed to fulfil their duties and obligations.

Ministry of Environment spokesman Neth Pheaktra rejected the PLCN’s statement on Monday as a publicity stunt with a hidden political agenda and an attempt to mislead the public and discredit the government’s efforts in protecting and preserving natural resources.

“The ministry acknowledged that small-scale forestry crimes still existed in some protected areas, which warrant continued crackdowns. Last year, the clampdown resulted in a decrease in natural resources-related crimes in Prey Lang – a complete opposite of what the PLCN alleged in its statement,” he said.

While expressing his support for joint patrols by PLCN activists in Prey Lang, Pheaktra said the ministry would not allow anyone to defame the government and forest rangers, whom he said have sacrificed everything to protect the forest.

He urged PLCN to submit its report along with evidence to the Ministry of Environment instead of pointing fingers at the authorities without any proof to substantiate its claims.

The PLCN’s statement also cited its 2018 report which showed that the group had confiscated numerous equipment used to commit forestry crimes before handing them as evidence to competent authorities.