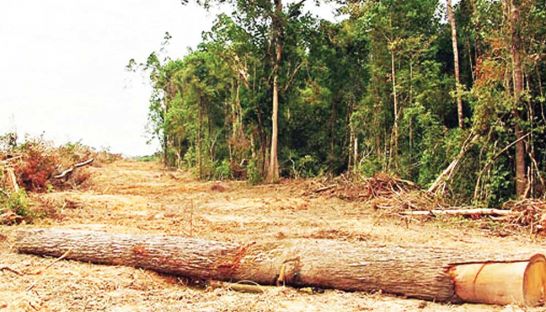 The Prey Lang Community Network (PLCN) said on Tuesday that forest in the Phnom Tnort-Phnom Pok and Prey Lang wildlife sanctuaries in Preah Vihear province are being cleared by groups of perpetrators from various provinces. Allan Michaud

Forest rangers and the Prey Lang Community Network (PLCN) said on Tuesday that forest in the Phnom Tnort-Phnom Pok and Prey Lang wildlife sanctuaries in Preah Vihear province are being cleared by groups of perpetrators from Kampong Thom, Kampong Cham, Siem Reap and Battambang provinces.

Boeung Per Wildlife Sanctuary director in Preah Vihear, Meas Nhem, told The Post on Tuesday that forestry and wildlife crimes in the province have gone up drastically, especially during dry season, despite frequent raids by relevant authorities.

Having recently led a patrol at the Phnom Tnort-Phnom Pok Wildlife Sanctuary in Sangkum Thmei district, Nhem said he found numerous cases of illegal logging in different locations within the sanctuary.

“For instance, during a four-day patrol from December 17-21 in the Phnom Tnort- Phnom Pok Wildlife Sanctuary, we found many ill-intended groups clearing forest illegally but they managed to escape.”

“When they saw us, they fled and left some evidence at the scene, including chainsaws, home-made guns, electrocuted devices and some animal traps,” he said.

Meas Nhem said the patrol team found many tall trees that were logged before they arrived. He said logging was also rampant in the Prey Lang Wildlife Sanctuary.

Nhem alleged that offenders seemed to have been backed by powerful, wealthy individuals and senior officials. He cited intervention from higher-level authorities when rangers and PLCN members patrolled the Prey Lang Wildlife Sanctuary.

“The offenders shouted insults and even made death threats against rangers and PLCN members. My team and the Preah Vihear’s PLCN members have already filed a complaint to the provincial court for intervention and legal action,” he said.

Nhem said forestry crimes happened in most parts of the province. On Sunday, Boeung Per Wildlife Sanctuary rangers stopped a car that was carrying one cubic metre of rosewood in Rovieng district’s Romny commune.

The car’s owner was not arrested but was fined in accordance with the forestry law.

A PLCN member told The Post on Saturday that he found more than 10 cubic metres of luxury timber hidden in Sre Veal village in Chey Sen district’s Thmea commune.

However, he said the timber disappeared the next day when rangers and his PLCN team went to collect the wood as state property.

“It happens almost every night. We keep protecting the forest but illegal loggers also keep logging trees regardless of the consequences when the forest is gone,” she said.