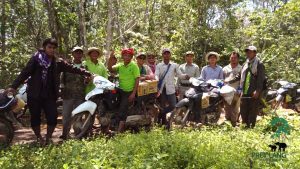 This data is presented in PLCN’s latest report on illegal logging in the Prey Lang forest. The report analyzes data collected by the network with smartphones in the specially designed Prey Lang app between August 2016 and February 2017.

The report also shows, how PLCN has improved their abilities to collect data not only on illegal activities, but also on how the forest is a valuable natural resource for the communities living around Prey Lang. Out of a little more than a thousand data entries registered in the Prey Lang app, 52 percent of the entries were categorized as natural resources such as animals, medicinal plants and rare tree species. Illegal logging activities, such as transport of illegal wood, meetings with illegal loggers and stumps of valuable trees found in the forest, accounted for 41 percent of the data entries.

The report also states, that PLCN members now collect data on Prey Lang more effectively. When PLCN started to use the Prey Lang app to monitor the forest in 2015, only 145 data entries per month were validated. Now, 235 entries are validated each month.

Despite these positive results, PLCN’s findings of an average of 72 illegal logging activities monthly clearly show that illegal logging continues in Prey Lang. In the report, PLCN therefore states the following:

“We, Prey Lang Community Network (PLCN), would like to express our deep concerns at the ongoing illegal logging in Prey Lang, despite the designation of Prey Lang as a Wildlife Sanctuary. We monitor the forest on a regular basis and collect information on illegal activities. We have noticed that illegal logging has decreased in the past months but we are still encountering many illegal loggers when conducting patrols in Prey Lang.

PLCN therefore strongly encourages the Ministry of Environment (MoE) and the Royal Government of Cambodia (RGC) to ensure that no further illegal logging takes place in the Prey Lang Wildlife Sanctuary.”

Help us raise awareness on deforestation in Prey Lang: Share the report with people in your network and on Facebook.