Cambodian forests were cut down in 2016 at a rate 30 percent higher than in 2015, new data shows. Out of the 16 years in which deforestation have been recorded in Cambodia, last year was the fourth. In total, around 200.000 hectares of forest were lost in the Kingdom in 2016. 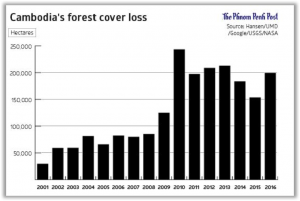 The data, which was released by the University of Maryland, uses satellite images to track the forest density of forests all over the world. In Cambodia, the satellite images show extensive development in forest loss, especially in the forests located in the northeast part of the country. This includes the Prey Lang Wildlife Sanctuary. The northeastern part of Cambodia has been a conduit for illegal exports of timber to Vietnam in the recent years, according to several reports.

This development is not surprising news to the Prey Lang Community Network, who is witnessing the rapid forest loss in Prey Lang. In period from April 2016 – February 2017, 83 entries per month, related to illegal logging activities was registered by PLCN on patrols inside the Prey Lang forest.

Minister of Environment, Say Samal, questioned the new data in a comment to the Phnom Penh Post. He said that the data did not match the Ministry’s official data on forest loss in Cambodia.