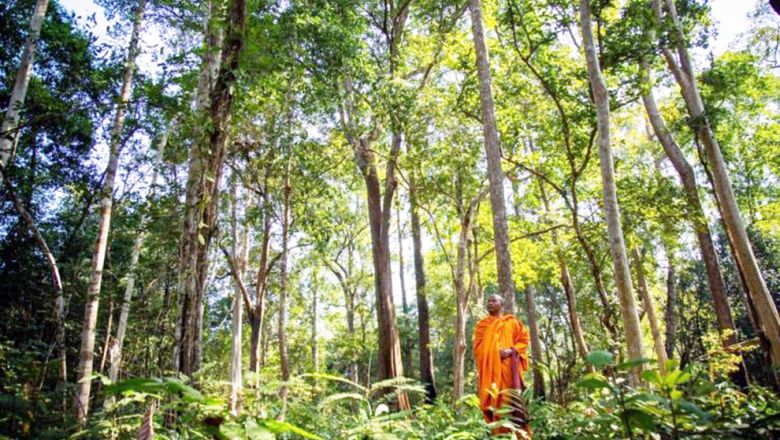 A community forest chief in Oddar Meanchey province has appealed to poachers to stop destroying wildlife and to all Cambodians to respect and love the Kingdom’s rich biodiversity. Bun Saluth via facebook

A community forest chief in Oddar Meanchey province has appealed to poachers to stop destroying wildlife and to all Cambodians to respect and love the Kingdom’s rich biodiversity.

Speaking to The Post on Monday, the Venerable Bun Saluth, head of the Sorng Rukhavorn community forest, expressed concern over the ongoing killing of wildlife in Cambodia.

Many other animals suffer a similar fate in Cambodia, he noted. At least, 10 to 20 boars are killed in this fashion every week, many of them by electric traps. Forest rangers also routinely encounter the headless bodies of bantengs, whose horns are coveted by poachers.

“My goal is to teach people to feel pity for these animals and love them instead. The Sorng Rukhavorn community forest has nearly 100 bantengs and we need to protect them so the next generation can also get to know them.

“I am very concerned about the situation here and want to ask those who are killing wildlife for financial gain to please stop and think about how precious these animals are. We must all strive to protect rare wildlife.”

Despite the presence of poachers, Saluth said in the last four years new animal species are making Sorng Rukhavorn community forest their home.

Oddar Meanchey’s Department of Environment director Phuong Lina acknowledged that poaching is a problem in Sorng Rukhavorn community forest, along with logging, but noted that such activities are declining.

“Last year, crimes against wildlife in Sorng Rukhavorn community forest decreased compared to 2018,” she said, adding that the department is fighting the problem by increasing public awareness.

She said several people have been caught poaching or logging illegally in recent years. Perpetrators were given a fine or sent to court.